Frankin White (1892-1975) came to this country from Australia in 1913 and two years later entered the Slade School as a student. He worked at the Admiralty making drawings in the Airship department during the First World War. In 1919 he re-entered the Slade and was shortly invited by Professor Tonks to join the teaching staff where he remained until he retired in 1957. On his retirement he turned his full attention to the Samuel Palmer School of Art, which had been operating at his home in Shoreham since 1924 when he first held summer classes in landscape painting for his Slade students. He exhibited at the London Group, Agnews, The Redfern, The New English of the 1920s and his work is held in permanent collections such as H.M. Queen Elizabeth The Queen Mother's collection, The British Museum, The Victoria and Albert, The Ashmolean Museum, Oxford, The Birmingham City Museum and Art Gallery, The Laing Gallery, Newcastle, and The National Gallery of Australia, Melbourne.  Also held in private collections of Dr Mary Woodall C.B.E., Mrs Thelma Cazalet-Keir C.B.E., Leonard Duke C.B.E., Noel Coward, amongst many others. 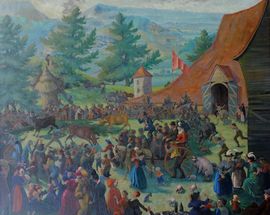