Joseph Wright (3 September 1734 – 29 August 1797), styled Joseph Wright of Derby, was an English landscape and portrait painter. He has been acclaimed as "the first professional painter to express the spirit of the Industrial Revolution".
Wright is notable for his use of chiaroscuro effect, which emphasises the contrast of light and dark, and, for his paintings of candle-lit subjects. His paintings of the birth of science out of alchemy, often based on the meetings of the Lunar Society of Birmingham, a group of scientists and industrialists living in the English Midlands, are a significant record of the struggle of science against religious values in the period known as the Age of Enlightenment.
Many of Wright's paintings and drawings are owned by Derby City Council, and are on display at the Derby Museum and Art Gallery. 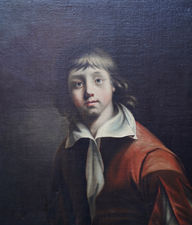 Portrait of a Young Boy