Madeline Rachel Wells, R.B.A. (1879-1959). Born in India, Madeline Wells studied at Westminster Art School under William Mouat Loudan, and at the London School of Art under Sir Frank Brangwyn. She married the artist Robert Douglas Wells (1875-1963) who specialised in landscape and still life painting. They lived in London at St. Albans Studios in Kensington. Madeline Wells became a member of the Royal Society of British Artists in 1915 and was elected a member of the Society of Women Artists in 1923. She exhibited widely over a period of more than thirty years. 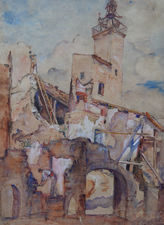