Arthur Sydney Watson (1881-1931). Sydney Watson was born Arthur Sydney Watson on 19 February, 1881 in Maghull, Merseyside near Liverpool. He was part of a large family of artists which included his Grandfather William Watson, his father William Watson Junior and uncles Robert Watson and Charles Watson. His brother William Robert and sister Caroline were also artists. He attended the Wallasey School of Art in Liverpool and also received tuition and encouragement from his family in particular his father, as his style and subject matter are similar. He exhibited at the Royal Cambrian Academy (RCA) in Conwy, Wales from 1919 to 1931 and posthumously in 1932. He became an associate member of the academy in 1921 and was elected a full member in 1923. In 1928, he became a member of the academy council. Watson died at Hillside, Capel Garmon, Llanrwst, Denbighshire, Wales in 1931. 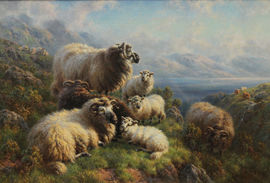