Walter Ernest Webster (1877-1959) was a British figure and portrait painter. He also worked as an illustrator.
Webster won a scholarship to study at the National Art Training Schools (which was renamed the Royal College of Art) before attending the Royal Academy Schools from 24 January 1899 to 1904. He was a good student and won scholarships and prizes including: a scholarship for painting in 1901; first prize (£50 and a silver medal) in a competition for six drawings of a figure from life. By the age of 23 he was living in Putney, London with his mother Mary and his elder sister Gertrude Mary, a shorthand-typist (b. 21 March 1876). He enlisted for service in the 4th Battalion of the Essex Regiment on 14 February 1916. He married Susan Beatrice Pearse (b. 19 January 1878), and artist and book illustrator, at Fulham in December 1919. By 1939 he was living with his wife and sister Gertrude Broome Villa, 27 Broomhouse Road, near Parsons Green. He still lived at that address when he died on 30 April 1959 leaving £6,158 17s 9d to his widow Susan and his sister Gertrude. Having once attended the Royal Academy Schools, Webster started exhibiting works at the Royal Academy, and continued to exhibit there almost every year until his death in May 1959. He also exhibited at the Royal Institute of Oil Painters, Royal Institute of Painters in Water Colours, Royal Glasgow Institute and the Paris Salon. He was awarded awarded bronze and silver medals in Paris before WW1 and a gold medal there in 1931. Webster produced illustrations for the front covers of several publications including "Ladies' Home Journal" and "Etude". Many of these reflected the Art Deco style of the period. He also produced illustrations for books, including: eight colour plates for "Champion" by John Colin Dane (1907); four colour plates for "King of the Air: or, To Morocco on an Aeroplane" (1907) by Herbert Strang; four colour plates for "For Treasure Bound" by Harry Collingwood (1910). He was a member of the Royal Institute of Painters in Water Colours (RI) and the Royal Institute of Oil Painters (ROI) and these designations are sometimes given after his name. Webster's work can be seen in many public collections in the UK including The Walker Art Gallery, Gallery Oldham, Paisley Museum and Art Galleries, McLean Museum and Art Gallery, Wellcome Collection, and the Government Art Collection. The last of these holds Webster's portrait of Her Majesty Queen Elizabeth II. Webster had earlier painted a water colour of the young Princess Elizabeth. 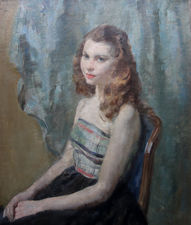 Portrait of a Young Woman Sitting 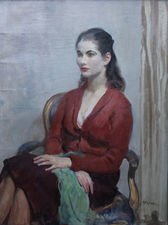 Portrait of a Young Lady in Red 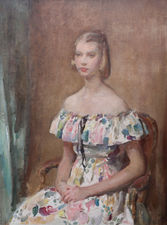 Impressionist Portrait of a Young Lady 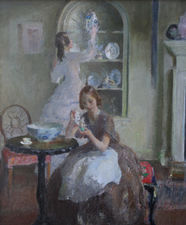