Thomas Millie Dow (1848-1919). Dow was born in Dysart, Fife and  is considered a member of the Glasgow School. Initially he studied law but gave it up to pursue a career as an artist. In 1877 he went to Paris where he studied under Gerome and Carolus Duran. Whilst there, he met William Stott of Oldham who became a lifelong friend and whose style was to have a great influence upon his work. In France he also spent some time working in Barbizon and Grez-sur-Loing where Lavery and other British Impressionist artists were working. Before returning to Scotland, he briefly travelled to America where he journeyed up the Hudson River to visit the artist Abbott Handerson Thayer who had previously studied with him in Paris. In the winter of 1889 he worked in Morocco and during the 1890s spent a great deal of time in Italy. In 1895 he left Glasgow and settled in St Ives. Dow painted landscape, figure and flower subjects and worked in oil, watercolour and pastel. He exhibited extensively. 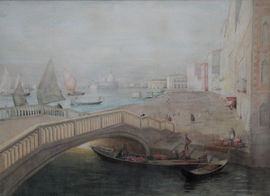