John Cecil Stephenson  (1889-1965). Painter, born in Bishop Auckland, Co. Durham. He studied at Darlington Technical College, 1906-08, at the Leeds School of Art, 1908-14, the RCA, 1914-18, and Slade, 1918. Between 1915 and 1918 he did war work, making tools. In 1919 he took on Sickert's studio, 6 Mall Studios, Hampstead, where he was later joined by Herbert Read, Barbara Hepworth and Henry Moore. From 1922 until 1955 he was Head of Art Teaching in the Architectural Department, Northern Polytechnic, Holloway Road. In 1932 he began making his first abstract works, exhibiting during the next decade in many abstract and constructive shows in England, France and the USA. In 1934 he exhibited with the 7&5 Society, along with the likes of Ben and Winifred Nicholson, Ivon Hitchens, Henry Moore, Barbara Hepworth and John Piper. During World War II he returned partly to figurative work, making paintings of the Blitz. From the 1950s he returned to large abstract paintings, realising many of the abstract compositions he had sketched out on a small scale in the previous decade, when materials had been in short supply. In 1951 he made a 10 x 30 ft. fluorescent paint mural for the Festival of Britain, and began working with ply glass for murals. In 1958 he suffered three strokes, which left him unable to move or talk. Partly for this reason he is today less well-known than many of his contemporaries, but he was one of the key figures in the development of abstract art in Britain. He is represented in the collection of the Tate and internationally. 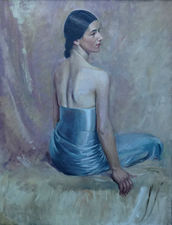