Sir James Guthrie (10 June 1859 – 6 September 1930) was a Scottish painter, best known in his own lifetime for his portraiture, although today more generally regarded as a painter of Scottish Realism. Guthrie became one of the leading painters in the group of artists called the Glasgow Boys. His early works of rural subjects painted with broad square brush strokes show the strong influence of French painters such as Bastien-Lepage. Guthrie was born in Greenock and trained as a lawyer before turning to art. After brief but stimulating periods in London and Paris, he committed himself to painting directly from nature in Scotland. Guthrie also experimented with pastel drawings and established a reputation as a successful portrait painter. He became president of the Royal Scottish Academy in 1902 and was knighted the following year.
Elected ARSA1888, RSW 1890, RSA 1892, HROI 1903, HRSW 1903, RBA 1907, HRA 1912. Exhibited regularly RSA, RSW, GI (80), 1882-1929,  and AAS. Represented in major galleries throughout Scotland as well as abroad. 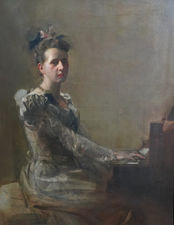 Portrait of Miss Isabella H. Gardiner at the Piano