Domenico Maria Sani (1690-1773). Italian painter and designer, trained in Andrea Procaccini's workshop in Rome. In 1721 he moved to Madrid, claimed by his teacher who had arrived in Spain a year earlier. There he worked until his death on decorative projects for the palace of La Granja, also making portrait paintings and cardboard for tapestries. His work as Procaccini's assistant focused on the various decorative tasks of the aforementioned palace, such as the marble and jasper cabinet and the painting of the new gallery. In Madrid he began his work in the Royal Tapestry Factory of Santa Bárbara in 1731, and the following year he painted several portraits of members of the royal family, including that of Isabel de Farnesio, who granted him various positions in the royal bureaucracy. He was appointed painter to the king and gave drawing classes to the prince of Asturias, the future Fernando VI, until occupying the post of roomer.
Hardly any examples of his activity as a decorator painter have come down to us, but we know the altarpieces made by order of Isabel de Farnesio in 1759 -year in which the Academy of San Fernando granted him the title of honorary director of painting- for the altars of La Farm.

Of his portrait work the effigies of the queen are not preserved, but that of the Infanta María Ana Victoria is attributed to him, where the influence of his teacher Procaccini is added to that of Jean Ranc, official painter of the kings. 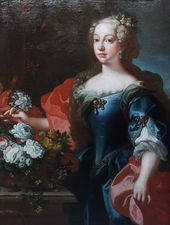