Sam Bough (1822–1878) was an English-born landscape painter who spent much of his career working in Scotland. Born in Carlisle, Cumberland, England he was self-taught and worked as a theatre scenery painter in Manchester and Glasgow. Encouraged by Daniel Macnee to take up landscape painting he moved to Hamilton from 1852-4 and worked there with Alexander Fraser. In Cadzow Forest (1857, Bourne Fine Art), influenced by McCulloch, is a 'magnificent' portrait of two ancient trees. He later settled in Edinburgh and followed Turner in becoming a skillful painter of sea ports. Examples include St. Andrews (Noble Grossart), and The Dreadnought from Greenwich Stairs: Sun Sinking into Vapour (1861, Private Collection). He later fell out with McCulloch, (their dogs apparently taking sides in the dispute). He was admired by Robert Louis Stevenson and painted a view of his house at Swanston, and the construction of Dubh Artach lighthouse. The engineering work for the latter was undertaken by the brothers Thomas and David Stevenson, Robert Louis' father and uncle respectively. R. L. Stevenson penned a glowing obituary of him. 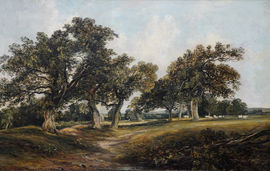