Robert Payton Reid RSA (1859-1945) was a painter and illustrator. He studied at the Royal Scottish Academy schools and in Munich and Paris.

He was born in Edinburgh and lived at North Queensferry, Fifeshire and later in Edinburgh. He rented a studio in London and became friendly with J W Waterhouse and on returning to Edinburgh became a founder member of the Scottish Society of Artists.

A quiet, sensitive, shy man, Reid became friendly with William Miller Frazer and Robert Noble. He returned regularly to the Continent, wintering in Monte Carlo and Tangiers. He first exhibited at the RSA in 1880 and continued to do so with few interruptions until his death in 1945. 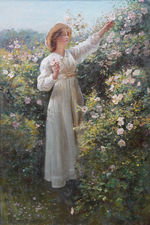 Portrait of a Lady Amongst Roses 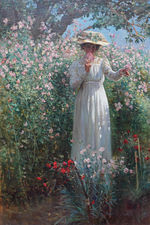 Portrait of a Lady with Sweet Peas