Robert Morley (1857-1941). Morley was born at Kentish Town, London on 19 November 1857, second son of Professor Henry Morley, LLD (1822-1894) and his wife Mary Anne née Stagle, who married at Kensington, London in 1851. In 1871, he was a 13 year old student living at Upper Park Road, St John, Hampstead with his mother 49 year old Mary Anne, and his four siblings, Violet 17, Henry Foster 15, Margaret 11 and Edith Caroline 6. Educated at the Slade School of Fine Arts under Alphonse Legros (1837-1911) afterwards at Munich and in Rome and was a Slade scholar and Painting Medallist. In 1881, a 23 year old artist still living at 8 Upper Park Road, Hampstead with his 58 year old father Henry, a professor of engineering at University College, London and two siblings, Henry and Margaret. He married at Manchester in 1895, Mary Hodgkinson and they moved to Tilford Farm House, Farnham Royal, Surrey. In 1911, a 53 year old painter artist, living at The Dial House, Frensham, Surrey with his 49 year old wife Mary, with a visitor and one servant and they later moved to Stroud, Gloucestershire. Painter of animal subjects, landscapes, genre and historical subjects and exhibiting largely figure subjects but after 1888 turned to just animal painting and landscape. He exhibited at the Royal Academy from 1884 and in 1921 he exhibited at the Society of Animal Painters "half a dozen ‘anecdotes’ rendered with his wonted taste for the whimsicalities of animal life!" and in 1922 at the Society of British Artists 'The Manor Farm 1693', "a sincere record of a charming stone-built house". A member of the Royal Society of British Artists 1889 and subsequently Hon. Treasurer 1890-1896 and a member of the Ipswich Fine Art Club 1919-1926.  Exhibiting in 1919 from The Dial House, Frensham two oils 'A Garden Gate' and 'Where Wild Fowl Call' and in 1921 'In Doubt' and 'In Off'.  In 1924 he exhibited from Langford, Lechdale, Gloucestershire two further oils 'In the Lull of the World' and 'First Come, First Served'. He died at Stroud, Gloucestershire in 1941, aged 83. 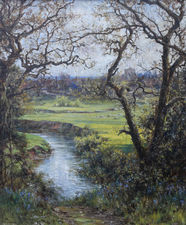 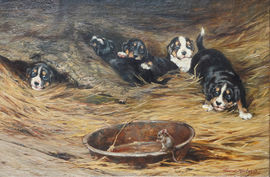 A Gleaner Mouse with On Looking Spaniel Puppies