Robert Macaulay Stevenson (1854-1952) was a Scottish painter associated, like EA Hornel, with the later history of the Glasgow Boys. His elder brother was the Liberal politician Sir Daniel Macaulay Stevenson, a Lord Provost of Glasgow and Chancellor of the University of Glasgow. Stevenson was influenced by the work of the Barbizon school, especially Jean-Baptiste-Camille Corot. He worked from studios in Glasgow, at Montreuil-sur-Mer in France, at Kirkcudbright, and at Bardowie Loch, Dunbartonshire. He was deeply involved in the artistic life in Glasgow and largely responsible for ensuring the Glasgow Art Club was won over to the new movement. He is best known for his paintings of river scenes, often in moonlight with use of rich impasto giving a rather gloomy but romantic aspect to the scene. Of all the Glasgow Boys it is said he was closest to Hornel and Henry in style although popular with all of them, Melville would never stay anywhere else when in Glasgow. Lavery called him the prophet of the School, having survived all the other Glasgow Boys, he became a symbol of what they stood for. In 1920 he married the Scottish artist Stansmore Dean.
Gold medal at the first Munich Secession exhibition, 1893. Diploma of honour at the second General Exposition of Fine Arts (Exposición General de Bellas Artes) in Barcelona, 1894.  Silver medal at Brussels International Exposition, 1897.
Exhibited: Royal Academy 2 in 1884 and 1892 but mainly Royal Scottish Academy 17, RSW,  Aberdeen Artist's Society 1894-8 and Glasgow Institute 75.  He is represented in major art galleries across the world. 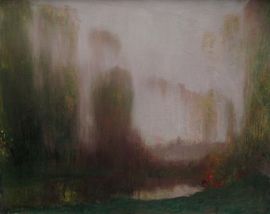