William George Robb (1872-1940). Robb was born in Ilfracombe, Devon. He studied at Aberdeen School of Art and then under Bouguereau and Aman Jean in Paris. He specialised in figures and landscape subjects and particularly favoured depicting figures in ballroom attire masquerading and playing instruments. He exhibited at the Royal Academy, other leading London galleries, and at the Paris Salon. A one man show of his work was held at The Fine Art Society in 1920. He lived in London and died on the 5th August 1940. A studio sale of the work which remained in the attic of his home for many years after his death was held at Bonhams on Lots Road in 2001.
Exhibited: Baillie Gallery 80, Chenil Galleries 1, Fine Art Society 171, Walker Gallery Liverpool 1, Manchester City Art Gallery 1, Royal Academy 10. 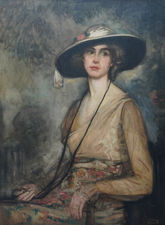