James Riddel (1857 - 1928) (aka James Alick Riddel) was born in Glasgow and trained at the Glasgow School of Art. He became Head of the Art Department at Heriot Watt College (now University) in Edinburgh. He worked in Scotland, Holland, Belgium and Canada. His seaside and coastal scenes were popular and he exhibited widely including at Royal Academy (London); Royal Scottish Academy; Royal Scottish Society of Painters in Watercolours and at the Royal Glasgow Institute of Fine Arts. Riddel was Treasurer of the RSW for many years. He painted a series of impressive genre scenes in the latter part of his career which were enthusiastically received by collectors. He died at Balerno, near Edinburgh in 1928. 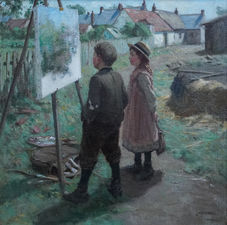