Geoffrey Hamilton Rhoades (1898-1980). Rhoades attended Dulwich College where his education included drawing from classical casts. After Dulwich he spent two years at Clapham Art School under L C Nightingale. He served in the Marines from 1917 to 1919. Rhoades then studied at Slade School between 1919 and 1924 under Tonks. he socialised with fellow artists Albert Houthueson, Percy Horton, Charles Mahoney and James Laver. Rhoades then spent two years at Christopher Turnor's country house painting family portraits, some murals, landscapes and making many drawings. In 1928 Rhoades taught at the Working Man’s College in Crowndale Road, London. In 1929 Geoffrey followed Percy Horton as the art master at Bishop’s Stortford College, remaining in this post for fifteen years. He was a friend and coleague to Walter Strachan. In 1934 Rhoades married Joan Jenner and they lived in London and had a son, Peter who also became an artist. In 1935 the Tate (Britain) bought his “Winter Afternoon, Chalk Farm” landscape. After the onset of the Second World War blitz, they moved house to Stebbing in Essex. They lived near to Great Bardfield where the very prestigious artists’ group including Edward Bawden, Eric Ravilious, Michael Rothenstein and a number of other distinguished artists had collected away from London. Rhoades and his wife were intimate members of this creative community throughout the course of the war. Their final move was  to Seven Stars, Cuddington on the Buckinghamshire and Oxfordshire border to be nearer to Oxford. Percy Horton was appointed Ruskin Master of Drawing at the Ruskin School, University of Oxford and Joan became his secretary. Horton employed Geoffrey as a tutor at the School and this began a very long relationship with the Ruskin, which was then housed in the Ashmolean Museum, and Oxford for both of them.  Joan was a secretary to Percy Horton, then Richard Naish and in 1974 Philip Morsberger. Rhoades continued to work at Ruskin until his retirement in 1972. He also conducted therapeutic art classes at St John’s Hospital, Stone, through the 1960s. He  steadily produced landscape and mythological figure compositions in oils and in a variety of graphic media. He died aged 82. Joan continued to live at the Seven Stars in Cuddlington until she was ninety seven years old.
Exhibited: Goupil Gallery 8, New English Art Club 3, Royal Academy 5, Royal Institute of Oil Painters  1. 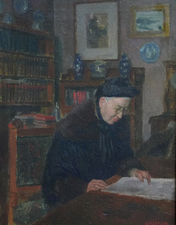 Interior Portrait of the Artist's Aunt