John Rathbone (1750-1807) was born in the Wirrel, Merseyside and was a landscape artist in 18th and 19th century. Rathborne collaborated with artists Julius Caesar Ibbetson and George Morland, with them often painting the figures in his landscapes, which was not uncommon at this time. Rathbone died in 1807.

Exhibited 48 paintings at the Royal Academy London between 1785-1806 and else where. 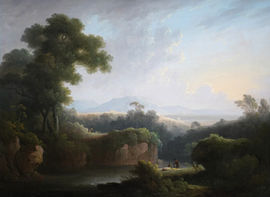 Figures Resting in a Landscape