Ramsay Richard Reinagle (1775-1862) was an English portrait, landscape, and animal painter, and son of Philip Reinagle. Ramsay Richard Reinagle was a pupil of his father, whose style he followed, and he exhibited at the Royal Academy as early as 1788. He afterwards went to Italy, and was studying in Rome in 1796. Subsequently he visited Holland in order to study from the Dutch masters. After his return home he painted for a time at Robert Barker's panorama in Leicester Square, and then entered into partnership with Thomas Edward Barker, Robert's eldest son, who was not himself an artist, in order to erect a rival building in the Strand. They produced panoramas of Rome, the Bay of Naples, Florence, Gibraltar, Algeciras Bay, and Paris, but in 1816 disposed of their exhibition to Henry Aston Barker and John Burford. In 1805 Reinagle was elected an associate of the Society of Painters in Watercolours, and in 1806 a member. He became its treasurer in 1807, and was president from 1808 to 1812 Between 1806 and 1812 he sent to its exhibitions sixty-seven drawings, mostly Italian landscapes and scenery of the English lakes. 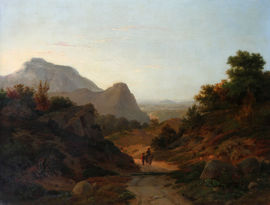