William Pratt (1855-1936) was born in Glasgow. He was a painter in oils and watercolour of landscapes, marines and figure subjects. He trained at the Glasgow School of Art and Academie Julian, Paris. He spent several years in Crail and from 1892–1894 he devoted himself to painting the sea from a studio he built on the shore at Kilminning,Crail. He was a very talented figure painter and was awarded a bronze medal for his painting, 'The Old Covenanter', in the jurors awards of the Edinburgh Exhibition in 1886. He exhibited 30 pictures in Crail for the benefit of Crail Public Library, including large portraits of Mr and Mrs Cairns of Ashburn House. He lived at Kirkintlloch, later moving to Lenzie around 1910. He is represented in Glasgow Art Gallery and also the Edinburgh collection.
Exhibited: Royal Academy 6, 1880-1936, Royal Scottish Academy 64, Royal Society of Watercolour Painters 7, Glasgow Institute 161, Aberdeen Artists Society 3, Walker Gallery Liverpool 23. 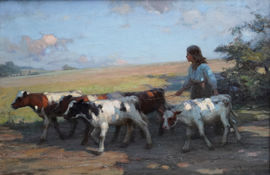