John Egerton Christmas Piper CH (1903-1992) was an English painter, printmaker and designer of stained-glass windows and both opera and theatre sets. His work often focused on the British landscape, especially churches and monuments, and included tapestry designs, book jackets, screen-prints, photography, fabrics and ceramics. He was educated at Epsom College and trained at the Richmond School of Art followed by the Royal College of Art in London. He turned from abstraction early in his career, concentrating on a more naturalistic but distinctive approach, but often worked in several different styles throughout his career. Piper disliked the regime at the Royal College of Art and left in December 1929. Piper and his wife lived in Hammersmith and held a joint exhibition of their artworks at Heal's in London in 1931. Piper also wrote art and music reviews for several papers and magazines, notably The Nation and Athenaeum. One such review, of the artist Edward Wadsworth's work, led to an invitation from Ben Nicholson for Piper to join the Seven and Five Society of modern artists. In the following years Piper was involved in a wide variety of projects in several different media. As well as abstract paintings, he produced collages, often with the English landscape or seaside as the subject. He drew a series on Welsh nonconformist chapels, produced articles on English typography and made arts programmes for the BBC. He experimented with placing constructions of dowelling rods over the surface of his canvases and with using mixtures of sand and paint. With Myfanwy Evans, Piper founded the contemporary art journal Axis in January 1935. As the art critic for The Listener, through working on Axis and by his membership of the London Group and the Seven and Five Society, Piper was at the forefront of the modernist movement in Britain throughout the 1930s. In 1935 Piper and Evans began documenting Early English sculptures in British churches. Piper believed that Anglo-Saxon and Romanesque sculptures, as a popular art form, had parallels with contemporary art. Through Evans, Piper met John Betjeman in 1937 and Betjeman asked Piper to work on the Shell Guides he was editing. Piper wrote and illustrated the guide to Oxfordshire, focusing on rural churches. In March 1938 Stephen Spender asked Piper to design the sets for his production of Trial of a Judge. Piper's first one-man show in May 1938 included abstract paintings, collage landscapes and more conventional landscapes. His second in March 1940 at the Leicester Galleries, featuring several pictures of derelict ruins, was a sell-out. Piper had first met Myfanwy Evans in 1934 and early the next year, when his wife Eileen left him for another artist, Piper and Evans moved into an abandoned farmhouse at Fawley Bottom in the Chilterns near Henley-on-Thames. The farmhouse had no mains electricity, no mains water and no telephone connection. They married in 1937. They gradually converted the farm's outbuildings to studios for their artworks, but it was not until the 1960s that they could afford to modernise the property. Piper was an official war artist in World War II and his wartime depictions of bomb-damaged churches and landmarks, most notably those of Coventry Cathedral, made Piper a household name and led to his work being acquired by several public collections. Piper collaborated with many others, including the poets John Betjeman and Geoffrey Grigson on the Shell Guides, the potter Geoffrey Eastop and the artist Ben Nicholson. In his later years he produced many limited-edition prints.

Major retrospective exhibitions have been held at Tate Britain (1983–84), the Dulwich Picture Gallery, the Imperial War Museum, the River and Rowing Museum, Museum of Reading and Dorchester Abbey. In 2012 an exhibition called John Piper and the Church, curated by Patricia Jordan Evans of Bohun Gallery, examined his relationship with the Church and his contribution to the development of modern art within churches. In 2016, the Pallant House Gallery mounted an exhibition entitled John Piper: The Fabric of Modernism which focused on Piper's textile designs, while 2017/ 2018 saw Tate Liverpool and Mead Gallery at Warwick Arts Centre mount a joint exhibition focusing on Piper's early career, with an emphasis on the 1930s and 1940s. 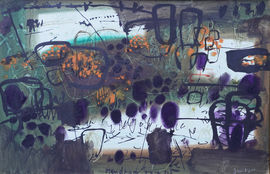