Philip Wilson Steer (1860-1942) was born at Birkenhead on 28 December 1860, the son of Philip Steer, a painter of portraits and teacher of painting.

The Steer family moved to Apsley House, Whitchurch, Monmouth, when Wilson Steer was three and he lived there for seventeen years attending the Hereford Cathedral School and, when he was about eighteen, studying drawing and painting under John Kemp at the school of art at Gloucester. He failed to enter the Academy Schools and went to Paris in 1882, studying first at Julian’s under Bougurean and later, in 1883, at the Beaux Arts under Cabanel.

He exhibited only two works at the academy: Fantaisie, the head of an Italian girl, and Discovery, a painting of a woman with a mask, which the artist laterdestroyed.
The grafting of French Impressionism on English stock has, perhaps, been Wilson Steer’s chief contribution to art in painting from Wilson, Gainsborough, Turner and Constable has been worthily continued to our own days; and it is interesting that the real impetus towards this only came to him later than his residences in Paris in 1882-83, through the exhibition at Dowdeswells of the works of Monet, Pissarro and Renoir. As a result of the French training of British artists, Scottish and English, in 1886 The New English Art Club, of which Steer had been for more than 30 years a corner stone, was inaugurated, Steer contributing one oil painting, Andante. 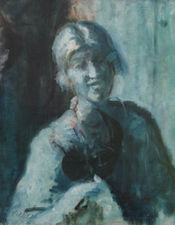 Blue Period Portrait of a Lady 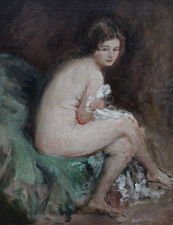 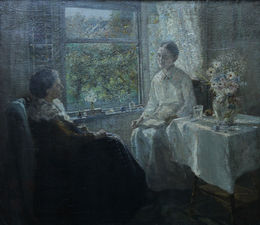 Daughter Reading to Mother in a Sunny Interior