John Morgan (1823-1886) was born in Pentonville, London. He was married to Henrietta (nee Clare) and had three children. The 1861 census recorded the family as living in Church Yard, Aylesbury and described Morgan as an 'Artist Subject Painter in Oils'. His wife, Henrietta, was described as an 'Artist's Counsellor'. By the 1870s the family had moved to Guildford and here Morgan painted a number of works including The Storm. Whilst studying at the London School of Design, Morgan was also apprenticed as a wood carver and designer to the furniture makers, Gillow, Jackson and Graham. To further his career as an artist he moved to Paris where he studied under the designers, Thomas Couture (1815-1879) and Paul Delaroche (1797-1856).  Morgan's work was also influenced by the work of other Victorian genre painters, most notably Thomas Webster (1800-1886) and William Powell Frith (1819-1909). He began exhibiting at the Royal Academy of Arts in 1852 and was elected to membership of the Society of British Artists in 1875.  There, he exhibited many works including Snowballing (now called Boys Snowballing held at the Victoria and Albert Museum in London). Many of John Morgan’s paintings feature children at play, as in the example above, including: Playing at Soldiers - Blackburn Museum and Art Gallery and Don’t ‘ee Tipty Toe - Walker Art Gallery, Liverpool. Another painting of the same genre, Find the Thimble, was sold at Sotheby’s, New York in November 1999 following the closure of Haussner’s Restaurant in Baltimore. This venue had housed a substantial art collection, initiated by the owners wife, Frances Wilke Haussner, in 1939. During his time in Aylesbury Morgan painted at least three pictures which depicted local scenes and people.  One, entitled Gentlemen of the Jury (also referred to as The Jury), earned him the nickname of 'Jury Morgan'. Morgan and his wife moved to Hastings in 1882 where he remained until his death.  His studio sale was held at Christie's, London on 1 March 1886.
Exhibited: Royal Society of Artists Birmingham 8, Glasgow Institute of Fine Arts 9, Walker Art Gallery, Liverpool 7, Manchester Art Gallery 12, Royal Academy London 13, Royal Society of British Artists 39, Royal Institute of Oil Painters  7, Royal Scottish Academy 2. 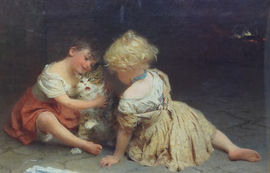 Portrait of Girls with Cat