Edward Joseph Molyneux (fl 1899-1904). Molyneux was a British landscape artist based in London. He painted mainly in oils but also produced some watercolours. He spent part of his life in India including with the 3rd Dragoon Guards in 1887, the designation used to refer to certain heavy cavalry regiments in the British Army from the 18th century onwards. He painted throughout his life including whilst in India and exhibited six works at the Royal Academy Lodon on his return, so between 1899-1904. These included A Himalayan Glacier and A Kasmir Glen, amongst others. He also painted landscapes in Ireland. 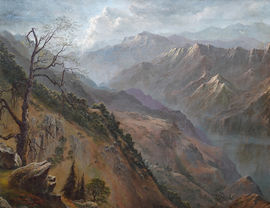