Reginald Mills (1896-1951). Mills was a portrait, landscape and coastal painter based in Hamstead London. Mills became a member of the Royal Society of British Artists in 1930 and regularly exhibited with that society and at the Royal Academy. Before the World War II he illustrated a number of childrens books but at the outbreak of war joined the Auxiliary Fire Service and as an active member of a fire fighting crew made a series of dramatic paintings recording the London Blitz. He also illustrated a number of books on the subject: "Londons House: As Seen Through the Eyes of the Fire Fighters", 1942 and "In the Service of the Nation: The N.F.S. Goes into Action", 1944. A number of his paintings are in the collection of the Imperial War Museum. 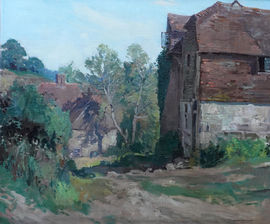