Sybil Margaret Maude (1878-1963) was a portrait and landscape artist who exhibited from 1909-25. She has adresses in Eastbourne in 1909 and Finchampstead, Berks in 1924. She was born in Brompton South Kensington, London, the daughter of Ashley Henry Maude and Emma Constance Henry who came from a wealthy background. Her siblings were Edith, Dorothea and Frances. However her mother died at the age of 39, necessitating that the four girls live with her maternal grandfather in Hampshire. He had many servants and was deputy administrator for the Isle of Wight, so Sybil lived the life of a cultured young woman which included painting. She never married and died a wealthy woman on 26 August 1963 aged 85 in a nursing home in Bournmouth. 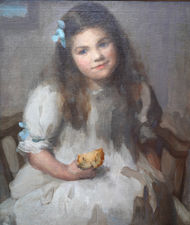