Elsie March, (1884-1974) Formerly a portrait artist and metal worker she went on to become a sculptor. Daughter of George Henry March and his wife Elizabeth Blenkin, Elsie was born on 3 October 1884 in Kingston upon Hull in the East Riding of Yorkshire, England. Her father was employed as a seed crusher foreman (oil miller) in Yorkshire. The family moved by 1901 to Battersea in London, where her father worked as a builder's clerk. Elsie was the seventh of nine children, eight of whom became artists. Three of them were sculptors, Sydney, Elsie, and Vernon. The other five artist siblings were Edward, Percival, Frederick, Dudley and Walter. The ninth sibling was her sister Eva Blenkin March. Both of their parents died in 1904. By the 1911 census, all nine siblings, still single, were living together at the 17-room family home of Goddendene in Locksbottom, Farnborough, Kent. Only two of the March siblings married. Elsie and her brothers established studios at Goddendene after 1901. On the seven acre grounds of the estate were three large studios, including a metal foundry. In order to work in natural daylight, the siblings arranged for the studios to have walls that could be slid back. The walls were tall enough that they could be utilised during wartime to hang up parachutes to dry. It was not unusual for the siblings to collaborate. Perhaps the best known example of this is The Response, the National War Memorial of Canada in Ottawa, Ontario. 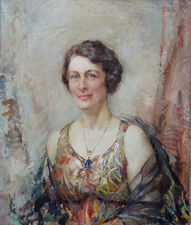 Portrait of a Lady with Pendant