Harrington Mann (1864-1937) was a Scottish portrait artist and decorative painter. He was a member of the Glasgow Boys movement, in the 1880s. Mann began his studies at the Glasgow School of Art. He then studied at the Slade School of Fine Art in London under professor Alphonse Legros. He then studied in Paris under the guidance of the figure painters Gustave Boulanger and Jules-Joseph Lefebvre at the Academie Julian for a short time. Mann’s early paintings from the 1880s are mainly of fishing communities in Yorkshire. He began to develop a name for himself in portrait painting in the 1890s. He had a strong sense of colour and design for decorating interior walls and for stained glass. In the 1890s he designed for the Scottish firm of J. and W. Guthrie (which became Guthrie and Wells). In 1893 he designed the stained glass for the west window of St Bartholomew’s Church, Barbon, in what is now Cumbria. In 1900, he moved south to London, also opening a studio in New York, where his paintings became popular. In London, he found success in society portraits, especially of children and including members of the British royal family. Mann’s use of colour was influenced by James McNeill Whistler. His bold brushwork shows the influence of John Singer Sargent. Mann was one of the founder members of the National Portrait Society in 1911. 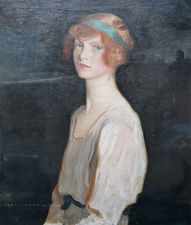