Lindhardt Wils, Tom, (1935-2007). Painter and designer. Born 15.2.1935 in Odense. Name change from Lindhardt Petersen to Lindhardt Wils 1975. In the early 1960s, Tom Lindhardt helped shape Funen's art environment with his spontaneous and abstract paintings. For a number of years he ran the gallery Exi in his home in Odense, where he exhibited the work of abstract artists. In 1963 he joined the avant-garde group ART 63, and that same year he wrote a manifesto whose message was to make art accessible to people. In protest against the grey concrete building and according to the manifesto, in the late 1960s, Lindhardt performed his colourful and imaginative play sculptures, which can be found in several playgrounds at home and abroad, including in Luxembourghaven, Paris. He also founded the Design company Kompan, which has gained recognition for its functional and at the same time human design. 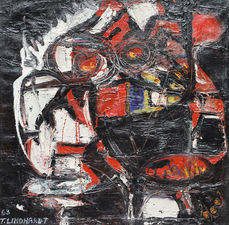