Ena Limebeer (1897 – 1984) – writer, artist and WW1 school girl poet. Ena Victoria Limebeer was born on 17th June 1897 in St. Mary Islington, Middlesex, in the north of London, UK. Her parents were Alfred J. Limebeer, an electrical mechanician, and his wife, Annie Emilia, nee Jefford.  Ena had two siblings – Alfred John, b. 1891, and Effie, b. 1895. Educated at the North London Collegiate School in Camden, a school exclusively for girls, founded in 1850 by Frances Mary Buss, Suffragette and pioneer of advanced girls' education, Ena went on to study art and become a writer and artist. On 9th June 1923, Ena married political scientist, originally from Bucharest, David Mitrany (1888 - 1975). The couple went to live in Kingston Blount, near Oxford. In 1929, Ena and her husband moved to America, where David had a visiting professorship at Harvard University and lectured at Yale University. In 1933, he became a permanent member of the newly established Institute for Advanced Studies at Princeton University. In September 1939, Ena and David returned to Britain. After their return from America, Ena and David lived at The Lower Farm in Kingston Blount and also had a flat in London in Grove End Road, London NW 8. David Mitrany died in July 1975 and, following the death of her husband, Ena lived in Westminster, London. Ena had poems and short stories published in magazines such as “New Age”, “The New Statesman”, “The Nation” and “The Athenaeum”, where Leonard Woolf was the literary editor. A collection of Ena’s poems was published by the Hogarth Press in July 1924: "To a Proud Phantom" - hand-printed and hand-bound by the Woolfs.

Ena also became famous for her paintings and exhibited them in the UK and at the Paris Salon during the 1960s. She painted all her life and after the publication of her last novel, focused entirely on painting. She died in the winter of 1984 in Westminster. 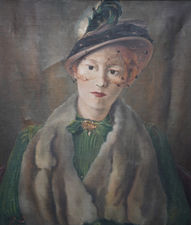 Portrait of Woman in Veiled Hat