Leonard Richmond (1889-1965) was born in Somerset and studied at Taunton and Chelsea Polytechnic. In WWI he was the Canadian Government war artist and in 1925 was commissioned to promote rail and hotel facilities through poster art in western Canada, by the Canadian Pacific Railway. His large colourful posters advertising the region and the Canadian Rockies were much admired, and he worked for the English railways as well.

During the 1930s he visited St Ives regularly, taking a studio there in 1932, setting up a summer painting school in 1935. He lived successively in Brentford (1912), Southall (1914), London (1919), and was giving his address in Guildford in 1935. Leonard Richmond is one of the many artists who began work in West Cornwall at an earlier date, moved away and then returned to Cornwall at a later date, in his case, for three years from 1946 to 49. He was a prolific exhibitor at Fine Art Society, RA, Cooling and Walker's Galleries. Also showed widely overseas winning a number of awards. These included the Tuthill Prize at Chicago International Watercolour Exhibition in 1928 and in 1947 silver medal at Paris Salon. Member of PS, RBA, RI and ROI. 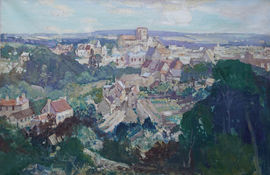