Wilhelm August Rudolf Lehmann (1819, near Hamburg -1905, in Bushey) was a German-English portraitist and author. He moved to the United Kingdom in 1866. Lehmann was born in Ottensen (now part of Hamburg) in the Duchy of Holstein, the son of painter Leo Lehmann. He and his elder brother Henri Lehmann studied in Paris at the École des Beaux-arts, in Rome, and with the painters Peter von Cornelius and Wilhelm von Kaulbach. Lehmann's major painting, The Blessing of the Pontine Marshes by Sixtus V was shown in Paris in 1846 and bought by the French government. In 1866 Lehmann settled in London, became a British citizen, and painted his best-known portraits. He married Amelia Chambers, daughter of the Scot author and naturalist Robert Chambers. Amelia's sister Nina married Lehmann's younger brother Frederick, and the extended social circle of the two couples included Charles Dickens, George Eliot, Robert Browning, Lord Leighton, and other prominent figures. In 1896, a number of his engraved portraits were collected and published as Men and Women of the Century. On 27 October 1905, he died at Boumemede, Bushey. He was buried in Highgate cemetery.

Lehmann exhibited more than 100 paintings at the Royal Academy between 1851 and 1904. 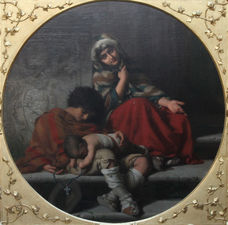