Harold Knight (1874-1961) was born in Nottingham, the son of an architect, and studied at Nottingham School of Art under Wilson Foster. It was at the School of Art that he met his future wife, Laura Johnson, who he married in 1903. After spending time in Paris and then at Staithes on the North Yorkshire coast, Harold Knight moved to Newlyn, with Laura, in 1907. The couple mainly lived and worked in Lamorna, becoming key figures in the Lamorna group, and they remained in Cornwall until 1919. Knight was a pacifist and refused to enlist for service in the Great War. He faced a tribunal to test his beliefs and he was put to work in north Cornwall, hoeing vegetables. Some artists from Lamorna established a temporary base near Dozmary Pool on Bodmin Moor and Knight relished their company, which he found more forgiving than some of the public disapproval of his pacifism (and even the views of some artists from the wider community).
Exhibited: Warrington (Museum & Art Gallery), Salford Quays (Lowry) and Birkenhead (Williamson Art Gallery), `Shades of British Impressionism : Lamorna Birch and his Circle, A Memorial Exhibition October 2004-February 2005. 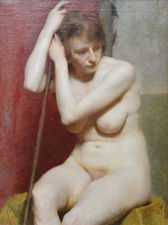