Keeley Halswelle (1831-1891) was an English artist.  Halswelle was born John Keeley Haswelle, son of David and Elizabeth Haswelle, at Richmond, Surrey. At an early age he contributed drawings to the Illustrated London News, and took up book illustration. Work for the Illustrated Shakespeare of Robert Chambers took him to Edinburgh, where he found a good friend in William Nelson, the publisher. In 1863 he is listed as living at Bellfield House in Duddingston Village on the southern outskirts of Edinburgh. In 1869 Halswelle left England for Italy, and during the next few years concentrated on subjects found there. He was elected a member of the Institute of Painters in Oil Colours in 1882. Halswelle lived in his later years at Stoner House, Steep, near Petersfield in Hampshire, where he was a ruling councillor of the Primrose League. In 1857 a painting of his was exhibited at the Royal Scottish Academy, and in 1866 Halswelle was elected associate. The Roba di Roma, exhibited at Burlington House, gained a prize at Manchester; but the popular work of this period was Non Angli sed Angeli, painted in 1877, which was exhibited at the Royal Scottish Academy in 1878. Halswelle in later life added to his reputation, as a landscapist. A painting in oil of the River Thames above Maidenhead was included in Henry Tate's gift to the nation, and went to the Millbank Gallery. In 1884 some of his views of the Thames, Six Years in a Houseboat, were shown in London; and he wrote a book under the same title. He died of pneumonia in Paris in 1891 and was buried at Steep. 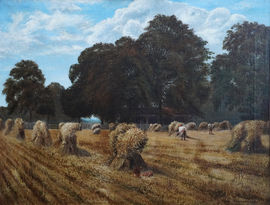