Bernard Kay (1927-2021) was born in Southport, Merseyside, above his father’s cycle shop. Encouraged by his parents he studied at Liverpool School of Art and subsequently at the Royal Academy in London in 1948-49. In 1954 he won a French government scholarship to study in Paris, for painting at the Académie Ranson and etching at the Atelier Friedlaender. Later that year, he travelled to Vallauris in the south of France where he met Picasso’s model and muse Sylvette David, who introduced Bernard into the circle of artists around Picasso. On returning to London Bernard worked for Robert Savage, the London picture framers. In 1955, he exhibited at the Archer Gallery, London and the Gallerie La Hune in Paris and his work featured in the Daily Express Young Artists Exhibition. His presence increased with showings at the Obelisk Gallery and in an exhibition mounted by Roland, Browse & Delbanco, who would represent him for some years. His first major show was held in 1959 in tandem with Norman Adams and a further show followed in 1962 with Philip Sutton. Examples of his work are now in museums and galleries across the world, including the government art collection. He was quite a prominent member of London’s artistic community in previous decades  being friends with David Hockney, Nicky Clarke etc.  He focused on large canvases in an abstract expressionist tradition, before returning to landscape paintings worked in a structured style using an earthy, muted palette. In 1984 Kay moved to Oundle in Northamptonshire, where he lived until his death in May 2021. 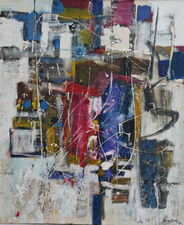 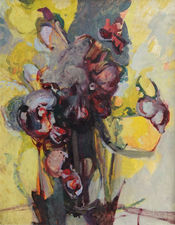