Joseph Thors (1842-1898) is a name recognised as one of the leading landscape artists of the Victorian period. A prolific painter in oils in the English rustic tradition, his scenes are of cottages, figures and animals, painted in a style derivative of the Norwich School. He lived in London but also worked in the Midlands where he made his name and where he is regarded as a member of the Birmingham School. It is known he travelled to France and he exhibited "View In Fontainebleau" No 389 at the Royal Academy in 1878. He is a well collected artist who has inspired the imagination of people who like to dwell for a moment on the rustic charm and hardship of our Victorian period.
Exhibited:
Royal Academy - 6
Royal  Society of British Artists - 15
Birmingham - 17
Royal Institute of Oil Painters - 1 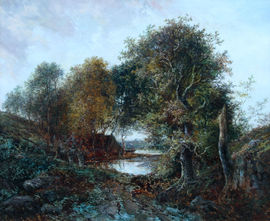