Joseph Mordecai (1851-1940). Mordecai  was a famous Jewish painter of portraits, genre scenes and literary subjects. Born in London, he studied at Heatherleys and the Royal Academy Schools and exhibited 15 times from 1873-99 at the Royal Academy, Suffolk Street, and also at the Royal Society of British Artists and the Royal Institute of Oil Painters. At The RA titles included our painting “A Nubian” 1873 and “Day Dreams” 1888  amongst many others. He received an honourable mention at the Paris Salon. Mordecai painted the last portrait of King Edward VII, held by the Royal Collection, as well as portraits of many celebrities of a bygone day. He was a double medallist at the Royal Academy and was still actively engaged in his profession after his eightieth birthday. Works are held in the National Portrait Gallery, Leeds and London collections. He lived in London for many years then in 1929 moved to Godalming in Surrey. He died at the age of 89. 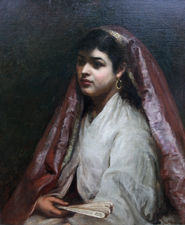