John Melville (1902-1986) was an English surrealist artist, described by Michel Remy in his book Surrealism in Britain as one of the "harbingers of surrealism" in Great Britain. He was, along with his art critic brother Robert Melville and the artist Conroy Maddox, a key member of the Birmingham Surrealists from the 1930s to the 1950s. He was a Painter of figures, portraits, still-life and landscapes in oil and watercolor. Self-taught, he was attracted to Surrealism in 1930 and as a member of the Birmingham Group, joined the Surrealist Group in 1938. He was a contributor to the London Bulletin in 1939, and to Arson in 1942. John exhibited his work first in London at the Wertheim Gallery in 1932, continued to exhibit in other 'places' in London and throughout the UK. His work is represented in a number of important private and public collections and his paintings often showed transformed figures and dream-like, unexpected conjunction of images. During the 1940s he painted portraits and still-life but returned to Surrealism in later works. Melville's relative isolation led to his work being neglected somewhat, but in recent years his reputation has grown and his singular style has led to his inclusion in a number of public exhibitions - notably "Surrealism: Two Private Eyes" at the Guggenheim, New York in 1999 and "Surrealism in Birmingham" in 2001. Jeff Jackson’s exhibition essay reprinted here (with his permission) expands on the development of Melville’s visual language. The Marvellous is always beautiful, any marvellous is beautiful, in fact only the marvellous is beautiful.' Andre Breton. In his authoritative book, Surrealism in Britain, Michel Remy has rightly pointed out that John Melville was, along with the likes of Paul Nash, John Banting, Edward Wadsworth, Tristram Hillier and John Selby Bigge, among the in Britain. Remy, who is Professor of English Literature and Art History at the University of Nice, and regarded as the leading authority on British Surrealism, goes on to argue that Melville's painting, The Museum of Natural History of the Child, is 'one of the key paintings of British Surrealism'. Remy explains that, along with the outstandingly talented Conroy Maddox, John Melville probably did most to develop the surrealist proposition in Britain by introducing visual distortion as a basic principle. But Melville's development as an artist is, in many ways like surrealism itself, not a straightforward journey from A to Z. If placing him at the core of British surrealism is essential to an understanding of his visual language, so then it is equally important to recognise Melville's journey to and beyond surrealism, to create a body of work over his lifetime that is, as the art critic Peter Davies has pointed out, 'vivid and at times visionary' and which never fails, 'to communicate an intense kind of poetry'. 'A beauty of strangeness born of unexpected meetings of word, sound, image, thing, person' Arthur Rimbaud. Melville's son Theo has pointed out that the path that led to his father's passion for painting remains obscure. However, as Theo notes, his father, along with his brother (the writer and critic Robert Melville), were frequent visitors to London in the 1920s. It was during this time that the works of Picasso, Matisse, Beckman, Ernst, Brancusi, and the writings of O'Casey, Cocteau, O'Neill, Brecht and importantly Breton were becoming available to the avant-garde in London. Melville was therefore witness to, and became part of, the most exciting and intense period of development within the arts in Britain since 1914. 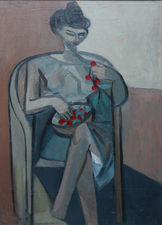