John Macdonald Aiken (1880 - 1961). Born in Aberdeen, Aiken was a painter in oils and watercolours as well as an etcher and stained glass artist. After serving a six years apprenticeship as a draughtsman with the lithographer Robert Gibb, he studied at Gray's School of Art in Aberdeen and at the Royal College of Art, under Gerald Moira, as well as in Florence. He became Head of Gray's School of Art in 1911-14 before devoting himself full-time to the practice of art, and was awarded the silver medal at the Paris Salon in 1923.
He lived for a time in London before returning to Aberdeenshire, and produced more than 100 etchings, 8 of which are identified in Guichard's British Etchers. Elected Associate of the Royal Scottish Academy 1923, Associate of the Royal Society of Painter-Etchers and Engravers 1924, Royal Scottish Academy 1935, Royal Institute of Painters in Watercolours 1944. 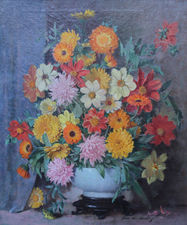