James Bolivar Manson (1879-1945) was born in London. In 1896 he began studying at Heatherleys' School of Fine Art, Lambeth School of Art and in Paris at Academie Julian. He held his first solo show at Leicester Galleries in 1923 and others at The New England Art Club Memorial show at Wildenstein and Ferens Art Gallery in 1946.

Retrospective exhibition at Malzahn Gallery in 1973. Tate Gallery and many provincial and foreign galleries hold examples of his work. He was a member of the Camden Town Group and secretary of it in 1910 and later Director of The Tate gallery from 1930-1938. He was great friends with Lucien Pisarro with whom he had holidayed together and went on painting excursion. 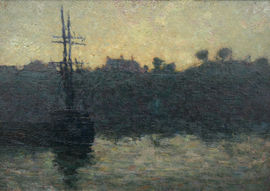