Born in Paris, the son of a society neurologist, Jacques-Émile Blanche (1861–1942) was a French painter of portraits and landscapes. He enjoyed fashionable success during his lifetime. From 1884 he visited England almost every year, where he regularly submitted work for exhibition. Blanche’s parents kept a house at Dieppe which was a centre for the town’s social scene, as was Blanche’s studio there at Le Bas Fort Blanc. In Dieppe in the mid-1880s Blanche encountered a cross-section of artists and cultural critics, including George Moore, Arthur Symons, Aubrey Beardsley and Charles Conder, as well as Claude Monet, Edgar Degas, Camille Pissarro, Paul Helleu and André Gide. When he visited Dieppe in 1885 Walter Sickert visited Blanche, although it seems likely they had met for the first time earlier the same year in London. Blanche’s memoirs suggest this first meeting took place when he visited his friend, Mrs Edwin Edwards, who with her husband was on friendly terms with the painter Henri Fantin-Latour. Sickert had been dispatched there by Whistler to try to persuade Fantin-Latour to visit the American artist’s studio. It was in Blanche’s Dieppe house in 1885 that Sickert refreshed his acquaintance with Degas. 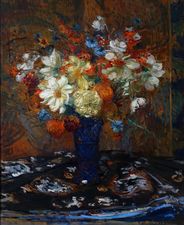 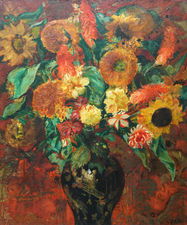