Edwin Frederick Holt (1830-1913). Little is known of the historical and genre painter Edwin Frederick Holt. He exhibited his work in London from 1850 to 1865, showing seven works at the Royal Academy, twelve at the British Institution and 36 at the Royal Society of British Artists, Suffolk Street. Holt lived at over ten separate addresses during the 15 years that he was exhibiting in London, most of which were in Camden Town. In 1857, his wife exhibited ‘A Study from Nature’ at The Royal Society of British Artists. 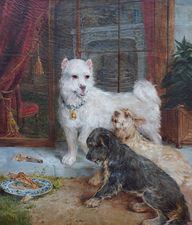