Francis Edwin Hodge (1881-1949) was an English painter. Born in Devon, Hodge studied at the Westminster School of Art and the Slade School of Fine Art. Among his other teachers were Augustus John, William Orpen and Frank Brangwyn and he also studied for a short time in Paris. Hodge enlisted in the Artists' Rifles at the start of World War I and served as a captain in the Royal Field Artillery on the Western Front. He continued to paint during the conflict and some of those paintings are now held by the Imperial War Museum. His work was entered to the painting event in the art competition at the 1932 Summer Olympics. During World War Two, the War Artists' Advisory Committee purchased examples of his work.  He married Hazel Bruce Dunlop (1911-  2005) an artist and art teacher and they lived in Chelsea. 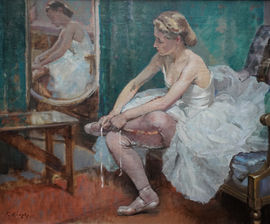 A Corner of the Dressing Room