Joseph Highmore (1692-1780) was an English portrait and historical painter, illustrator and author. Highmore was born in London, the third son of Edward Highmore, a coal merchant, and nephew of Thomas Highmore, Serjeant Painter to William III. He displayed early ability but was discouraged by his family from taking up art professionally, and began a legal training instead. At the ending of a clerkship at the age of 17 (during which he continued to attend a drawing academy run by Godfrey Kneller and lectures on anatomy by William Cheselden), he abandoned the law and started to work as a painter. On the revival of the Order of the Bath in 1725, he was selected to paint the knights in full costume. The years 1732 to 1734 were spent on a tour of the Netherlands and France. In the next few years he received patronage from the royal family, but during the 1740s began to cater more for a middle-class clients. In 1762 Highmore sold the contents of his studio and retired to Canterbury, where he lived with his daughter and son-in-law. Highmore died aged 87 on 3 March 1780. He was buried in sheep's wool (to comply with a 17th-century statute to encourage the wool trade) in the fifth bay of the south aisle of Canterbury Cathedral. His wife Susanna Highmore (née Hiller) was a poet, though little of her work was published. His son Anthony Highmore (1719–99) was an artist, one of whose 15 children, Anthony Highmore Jnr. (1758–1829), became a writer on legal affairs and a social activist. In addition to his work as a portraitist, Highmore painted works illustrating biblical subjects, historical painting being a style which Highmore had picked up on his travels in France. One such biblical painting is Hagar and Ishmael, which Highmore donated to the Foundling Hospital for the purpose of decorating its Court Room. The painting is now part of the Foundling Hospital art collection at The Foundling Museum in London. In 1744, Highmore painted a series of 12 paintings after scenes from Samuel Richardson's Pamela, or Virtue Rewarded, which were engraved by Benoist and Louis Truchy. Some of them were displayed within the temporary exhibition, Basic Instincts, curated by Jacqueline Riding at The Foundling Museum from September 29, 2017 to January 7, 2018. The exhibition explored Georgian attitudes to love, desire, and female reputation through the radical paintings of Joseph Highmore. One of the most prominent paintings displayed was The Angel of Mercy (c.1746), which is thought to be a painting draft for a larger piece. 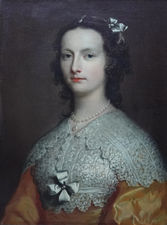 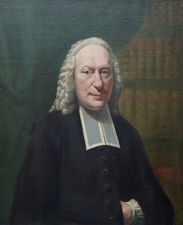 Portrait of a Cleric