Herbert Wilson Foster (1846-1929) was born at Endon, Stoke -on -Trent on January 18, 1846. His father was a pottery artist and Herbert too worked in the industry as a tile designer for Minton. While at school in Hanley he won medals for his art work and at the age of 24 won the silver medal at the Worshipful Company of Painters. His talent won him a scholarship at South Kensington and he later went on to study in France and Belgium. Foster was a friend of George Heath, the Moorland poet who died at a young age and Foster drew the illustrations for a memorial edition of Heaths’ poems and designed his monument in Horton Church yard. Foster lived at West Bridgford, just outside the city of Nottingham and married Rebecca Fisher from the village of Scarrington, east of Nottingham. In 1891, Foster became a teacher at Nottingham School of Art and at his death in 1929, the principal said of him: "He was one of the most distinguished life masters in the country. He was certainly the best man we have ever had in that time. He was a brilliant student, and an exhibitor at the Royal Academy." Foster found time to exhibit his work at the Royal Academy from 1870-1899 these being genre scenes of daily life and his figures feature prominently in his paintings.
He exhibited extensively between 1881-1917. Royal Academy 19, Royal Institute 6, Royal Hibernian Academy 1, Royal Institute of Painters in Oils 1, Manchester 5, Birmingham 2. Liverpool 21, Nottingham Museum 33. 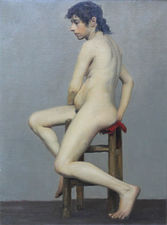