Herbert Davis Richter (1874-1955) was born in Brighton on 10th May 1874. Richter was a British artist who worked in many mediums: oil, watercolour and pastel. He was also master of many genres: still life, architectural studies, figures and interiors for which he is best known.

Richter painted several scenes in Buckingham Palace and also the homes of many society figures of his day, in addition to scenes in his own homes in Redcliffe Square, London and Hungerford. He studied furniture design at Bath School of Art before setting himself up in business in Bath as an architect and designer 1895-1906. After this period Richter travelled to London to continue his studies, enrolling at Lambeth College and the London School of Art where he studied under Browning and J. M. Swan. 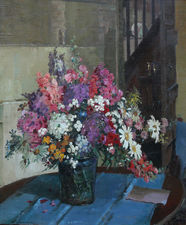 Floral Arrangement on a Table 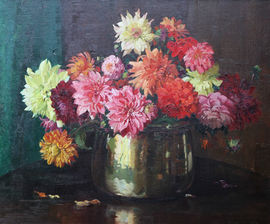