Henry George Hine RI (1811-1895) - Hine was born in Brighton, the  son of a coachman.  He taught himself to paint by copying the work of A. V. Copley Fielding. He spent some years painting before becoming apprenticed to the engraver Henry Meyer in London. Thereafter he spent two years in Rouen and in 1841 became employed as a wood engraver. From 1841 to 1844 he drew for Punch and, afterwards, for rival publications, including the Illustrated London News. Hine had begun to exhibit landscapes in 1830, but it was not until 1863 that he was elected an Associate of the New Watercolor Society [i.e., the Royal Institute of Painters in Watercolor]. The following year he was elected to full membership and served as Vice President from 1888 until the end of his life. In 1867 the Art Journal wrote: "The landscapes of H. G. Hine are of singular beauty." Throughout his career, Hine was noted for the delicacy and subtlety of his work. 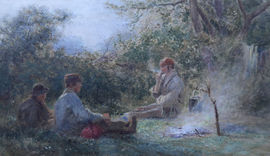 Gypsies Around a Camp Fire