Harry John Pearson RBA (1872-1933) was best-known for his portrait and figure subjects, in particular of children and society women. Painting during the inter-war period, his portraits typify the 1920s art deco style, featuring wonderful 1920s dress. Pearson trained at the Royal Academy Schools and exhibited at the Royal Academy 1916-27. A successful commercial artist, he produced striking advertising images for magazines such as Women's Pictorial, The Illustrated London News and Homes and Gardens. He exhibited 127 paintings with the Royal Society of British Artists, to which he was elected a full member in 1915, and he was later elected president of the Langham Sketch Club. He also exhibited with the Royal Society of Portrait Painters, the Royal Institute of Oil Painters, the Royal West of England Academy, the International Society and the Walker Art Gallery in Liverpool. He was asked by Princess Marie Louise to provide a miniature painting for Queen Mary’s dolls’ house, the largest, most beautiful and most famous dolls’ house in the world, which is filled with thousands of objects made by leading artists, designers and craftsmen. Works by Pearson are held in local and national public collections in the UK, including the National Museum Wales. 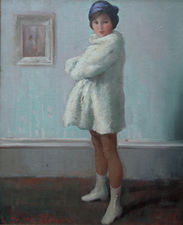 Portrait of a Girl in a White Coat