Børge Herman Hansen, (1918-2011). Painter and graphic designer. Born in Nakskov in south Denmark. Hansen began as many in the purely naturalistic painting, but the encounter with the bornholm nature and especially the faceted cuts of the quarries brought him into a more abstract-expressionist imagery, which, however, is still tied closely to the nature experience. For a time he worked with mixing the color with sand, which contributed to the almost modelled nature of the images, where the structure of the surface itself was used as an image-creating element. Hansen has in recent years worked his way towards an increasingly bright color, perhaps inspired by his Greece stays, but in the colouring position also clearly influenced by Edvard Weie, while in the idiom there is mainly influence from Serge Poliakoff. 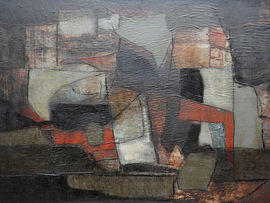