Henry Robinson Hall, (1859-1927), also listed as H R Hall, Henry R Hall and Henry Hall was a painter in oils and watercolours, noted for his paintings of Highland Cattle. He was born in York in 1859 and when his mother Eliza Robinson remarried in 1867 his surname changed to Hall. He later moved to Newcastle upon Tyne and was much involved with the artistic community there. in 1885 he moved to Flyde Lancashire where he married his wife Mary Annie nee Bleasdale. The couple moved several times including to Barrow in Furness and then Coniston in Cumbria, where he ran an artist's supply shop and cafe, as well as a studio for his painting. He died on the 31st May 1927 and is buried in the churchyard of St. Andrews, Coniston.

He exhibited from 1895-1903 at the Royal Academy, Royal Society of Artists, Birmingham and the Royal Scottish Academy.
Information from The Dictionary of British Artists and wikipedia. 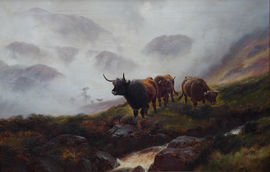 Cattle in the Mist at Ben Lomond, Scotland