Norah Neilson Gray (1882-1931) was a Scottish artist of the Glasgow School. She first exhibited at the Royal Academy while still a student and then showed works regularly at the Paris Salon and with the Royal Academy of Scotland. She was a member of The Glasgow Girls whose paintings were exhibited in Kirkcudbright in July and August 2010 including Exotic. Gray was born at Carisbrook on West King Street in Helensburgh in 1882 to George Gray, a Glasgow ship owner, and his wife, Norah Neilson, who was from a Falkirk auctioneering family. She was the second youngest of seven children and her sisters Tina and Muriel remained her closest friends throughout her life. They achieved success as a surgeon and lecturer respectively. She began her artistic career in 'The Studio', at Craigendoran just outside Helensburgh run by Misses Park and Ross. The Studio was one of a number of private drawing studios available to young 'ladies' before they were granted entry into the schools of art. She became a member of the Glasgow Society of Lady artists. Gray and her family then moved to Glasgow in 1901 so she could attend the Glasgow School of Art until 1906. She trained under the Belgian Jean Delville and Fra Newbery and was a contemporary of Jessie King.  In 1905, while still a student, Gray had her portrait of her eldest sister Gerty accepted for display at the Royal Academy in London. She taught fashion-plate drawing at the school from 1906 and remained on the staff to 1918. Gray also taught at St. Columba's in Kilmacolm which at the time was a girls' school. Gray was said to have been nicknamed "Purple Patch", because of her insistence that colours could be seen in shadows if you looked correctly. By 1910 Gray was regularly exhibiting portraits at the Royal Academy, the Royal Glasgow Institute of the Fine Arts and at the Paris Salon. She had her own studio at Bath Street in Glasgow and held her first solo exhibition at Warneuke's Gallery in Glasgow. In 1914 Gray was elected a member of the Royal Scottish Society of Painters in Watercolour and illustrated a volume of work by Wordsworth. Gray adopted a pointillist technique for her 1914 painting, The Missing Trawler now in the collection of Kelvingrove Art Gallery and Museum. World War I saw Gray produce some of her most notable work. The Country's Charge, from 1915, depicts a women and child wrapped in a shawl. The painting was shown at the Royal Academy and sold for the benefit of the Red Cross and then donated to the Royal Free Hospital. Her painting The Belgian in Exile, which was completed in 1915, shows a Belgian refugee from Liège who had fled to Scotland after his country was invaded. The painting was shown in Glasgow in 1916, at the Royal Academy in 1917 and at the Paris Salon in 1921 where it was awarded the Bronze Medal. During the War, Gray volunteered as a nurse with the Scottish Women's Hospitals and was sent to France where she also found time to paint and sketch.  A painting Hôpital Auxilaire 1918 from that time was offered to the Imperial War Museum but the Women's Work Sub-committee of the Museum refused to accept it and requested a painting showing a woman doctor instead. Hôpital Auxilaire 1918 shows the vaulted thirteenth century Royaumont Abbaye, near Paris, where women had organised a hospital to treat the casualties of the war. The hospital was staffed by Scottish Women's Hospitals, under the direction of the French Red Cross. Her second painting of Royaumont Abbaye, entitled The Scottish Women's Hospital In The Cloister of the Abbaye at Royaumont. Dr Frances Ivens inspecting a French patient was accepted by the IWM in 1920. After World War One Gray returned to her work as a portraitist, most commonly painting young women and children, decorative but unsentimental. Her paintings are characterised by unconventional placing of the figures, unusual colour schemes and shadow patterns, as in Mother and Child. In the 1920's the three Gray sisters, all now professionals and unmarried, bought a car which enabled them to spend more time at the family home on Loch Long, some 35 miles west of Glasgow, which they had recently inherited. A large number of Gray's landscape watercolours were painted in this area. In 1923 Gray won the Silver Medal at the Paris Salon for her painting Le Jeune Fille. Local recognition of her achievements came in 1921 when Gray was chosen to be the first woman to join the influential hanging committee of the Royal Glasgow Institute of the Fine Arts. Her fellow painter on the committee was Glasgow Boys artist James Whitelaw Hamilton. In 1924 she was elected to the Society of Scottish Artists. She later had a solo exhibition at Gieves Gallery in London in 1926. Whilst at the peak of her career, Gray died in Glasgow at the age of 48 on 27 May 1931 of cancer. A commemorative exhibition of her work took place the following year at McLellan Galleries, Glasgow. A retrospective was mounted at Dumbarton District Libraries in 1985. At the time of her death she was considered ‘the foremost Scottish woman painter’. Gray's paintings are in several national collections. From June to August 2010 there was an exhibition of the Glasgow Girls who together with the boys made up the Glasgow School. Gray's paintings were included in the exhibition in Kirkcudbright Town Hall. The painting Little Brother is held at the Kelvingrove Art Gallery. In 1978 her sister, Tina, left Hôpital Auxilaire 1918 to Helensburgh on the condition that a permanent place be found to exhibit it. The painting now hangs in the town's library. 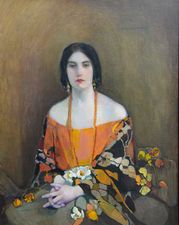